One day in April, I received a message from a man from Liverpool. He and his partner of 30 years were planning a trip to San Francisco to get married at City Hall in “the gay capital of the world,” and wanted to know if I could help them. They had no idea where to start, so I immediately began to plan their whole weekend, working to set them up with appointments and activities, and to make their wedding weekend even more fabulous than they could have imagined. 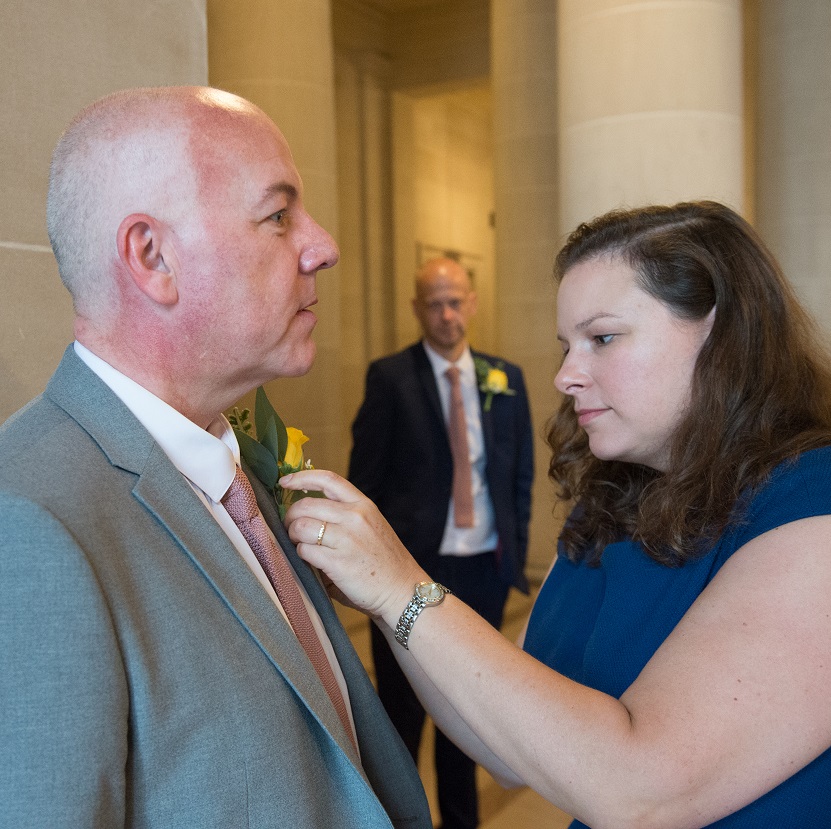 With only the two of them coming from the U.K. for the wedding, I took on some additional roles beyond planner. I was their witness, florist, and travel agent. I planned an itinerary for their whole weekend, made them each a yellow boutonniere, and signed their marriage license. 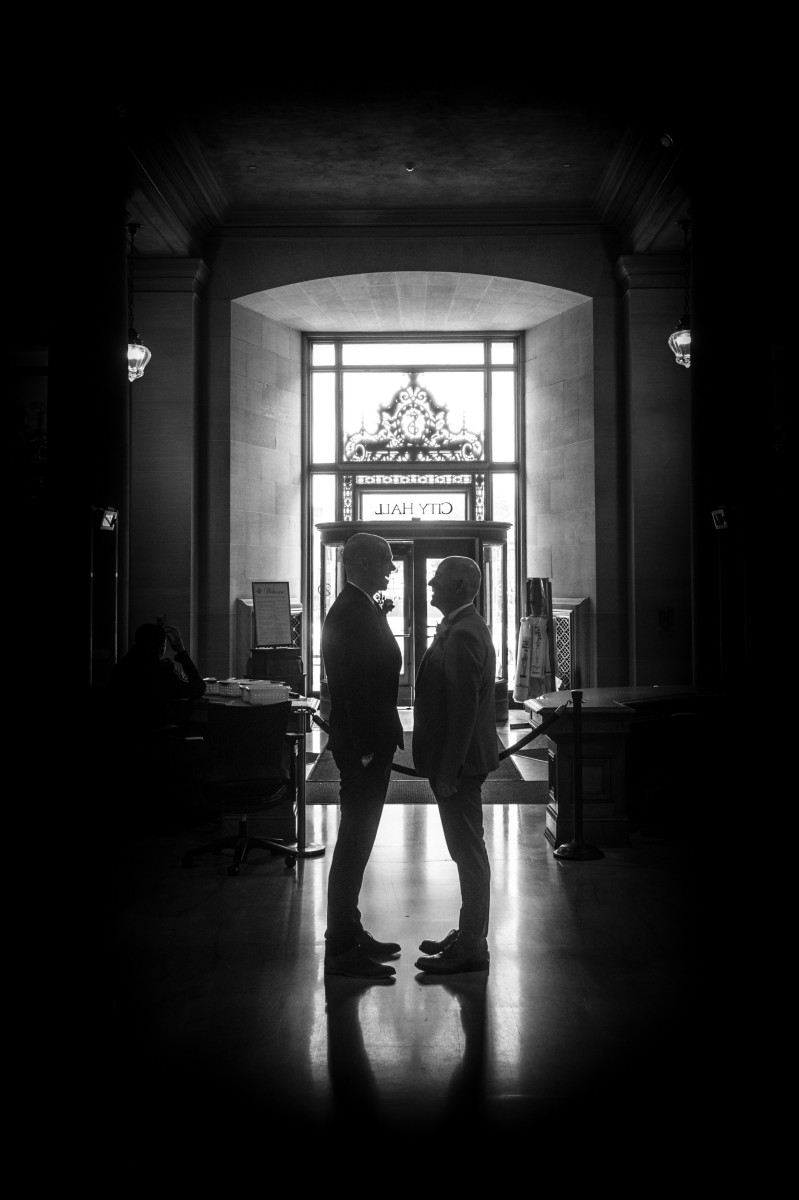 The lasting artifacts of any wedding are the photographs, so I suggested the fantastic Jim Vetter, an amazing photographer, to shoot the wedding. He took fantastic shots, focusing on the palpable love between the grooms, and highlighting their day with a backdrop of the gorgeous City Hall.

The grooms started the day with Jim at a local bar for a bit of “Dutch courage” and a photo session before the ceremony. They met me at City Hall for the licensing appointment, and then we all waited for the ceremony appointment, taking advantage of the wait time to take some more great photos around the Beaux Arts-style building. 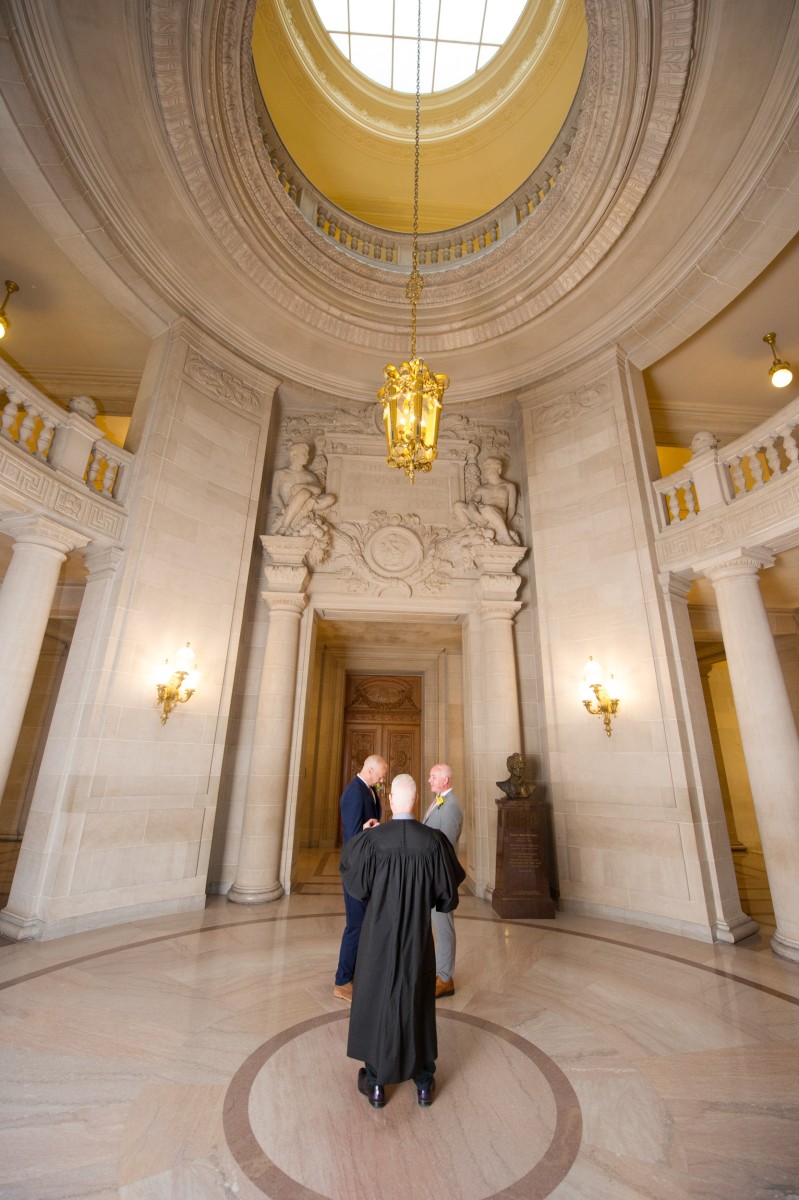 At our request, the Marriage Commissioner was glad to perform the ceremony in the Rotunda, near the statue of Harvey Milk. It was beautiful and sweet, and the grooms fumbled a bit with the rings, and everything was perfect.

After the ceremony, knowing that the grooms wanted to see more of the City, off they went with Jim to visit memorable landmarks, and got great shots of the grooms on cable cars, at the Ferry Building, in the Haight, and in the Castro. 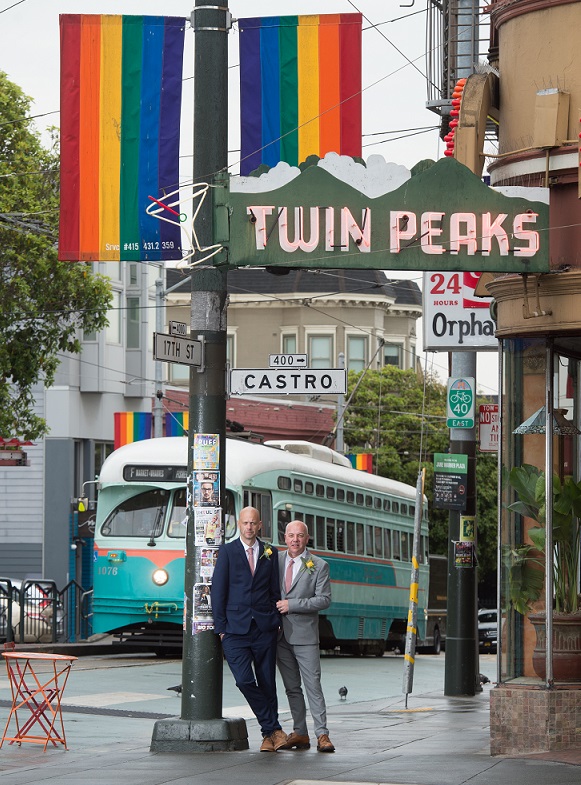 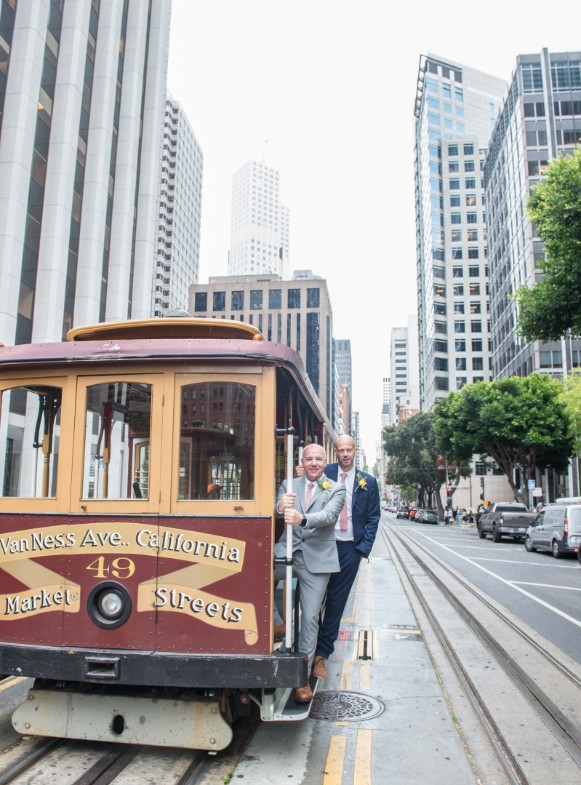 San Francisco City Hall is a gorgeous venue for a wedding of any size, and can be rented for large, evening weddings. But if you are planning to go there for a daytime elopement or microwedding, there are a few things to note.

Microweddings can often seem elusively simple, but ensuring that all the little details are in place can help guarantee that your wedding will feel just as special and grand as a large elaborate ceremony. And you can always decide to throw a big party (or several!) sometime after the fact if you’d like to include more people in your celebration. Whether you decide to plan your wedding to be micro, macro, or somewhere in between, I can guide you through all the steps to make sure you have as smooth and fantastic a time as these wonderful grooms!

PrevWedding Traditions Are An Endless Buffet, Not Just Two Choices
What Does a Wedding Planner Really Do, And Why Do I Need One?Next
Facebook-f Instagram Pinterest-p Linkedin-in Yelp